Moving From NYC To Atlanta: Everything You Need To Know 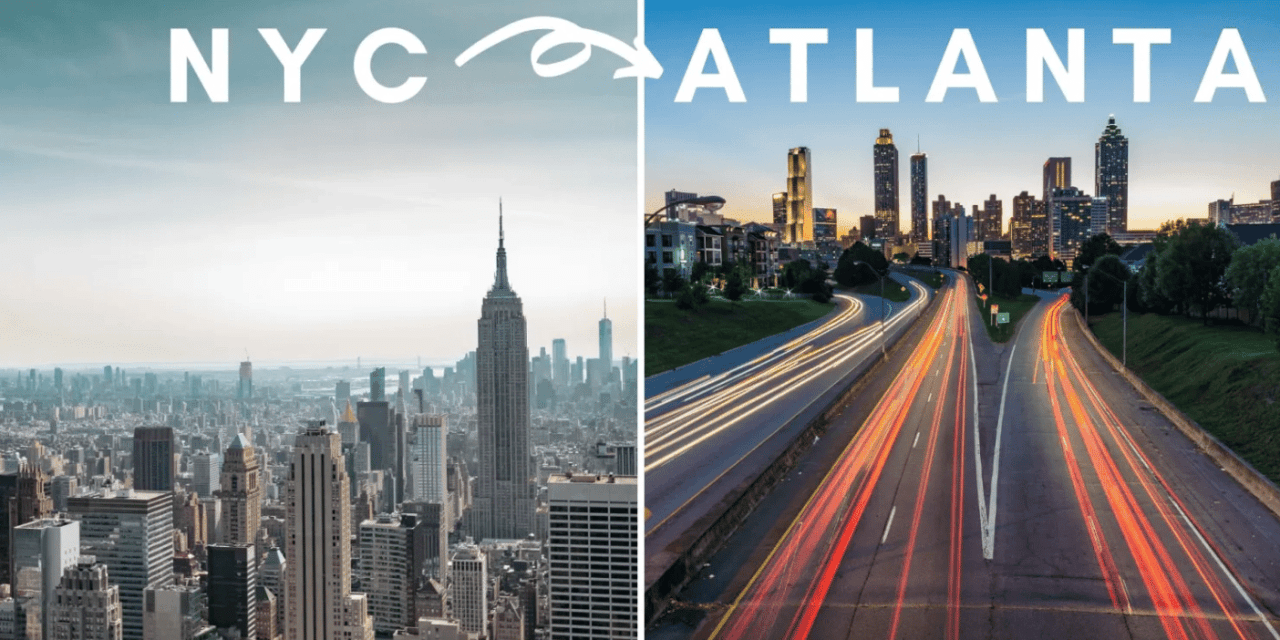 Thinking about moving from New York to Atlanta? There are a few things you need to know before moving to this fast-growing metro area. Atlanta is a cultural hub where the cost of living is low, job opportunities are overflowing, and the dating scene isn’t too shabby (considering half the population is composed of singles).

A city hustle with a backyard makes Atlanta a great place to start a career, raise a family, or provide a much needed change of pace. Atlanta offers a little bit of everything: revitalized neighborhoods, warm weather in every season, a lively art and music scene, and a bustling TV and film industry.

Already Planning on moving from NYC to Atlanta? Call AptAmigo, we’ll help match you with your dream apartment in The ATL.

5 Reasons Why New Yorkers Are Moving to Atlanta

Atlanta and NYC alike are full of great little neighborhoods, hidden gems, and local mom-and-pop vintage stores. If you’re feeling homesick, make sure to check out the many similar establishments to NYC that Atlanta has to offer. Missing Chelsea Market? Check out Ponce City Market for a popular place to grab a bite to eat along the Beltline. Missing Central Park? Spend your Saturday in Atlanta’s expansive, lush green space; Piedmont Park.

Although there are many similarities, Atlanta is still quite different than NYC. Many Atlanta neighborhoods are walkable, but the city itself is huge, and unlike New York, most people use a car to get between places. The Atlanta Beltline is a re-purposed walking trail that was once a major railway corridor.

This hidden gem may be one of the best ways to meet a new friend or find a new hobby. Many locals and tourists frequent the skate parks, walking trails, and green spaces located along the Beltline.

As an Atlanta native, I can attest that this is a “step out and be seen” type of city. Atlanta nightlife sets the perfect stage for “ATLiens’’ who love a little flash and glamour.

You won’t have trouble finding a great time out on the town in Atlanta— from celebrity-owned bars and restaurants to pop up events, exclusive lounges, and clubs— there is a scene for every crowd.

Although Atlantans appreciate good old-fashioned Southern hospitality, the hustle mentality is real here— if you’re not willing to pull yourself up by your bootstraps, it’ll be hard to fit in. New Yorkers will find comfort in this familiar energy, but can enjoy a slower pace as well.

The typical Atlantan likes to unwind on the weekends, focusing their activities around family and food. You’ll find residents of Atlanta sipping cocktails on rooftop bars and filling their bellies with southern staples. The chance to feast on world-class chicken and waffles, collard greens, and fried okra should not be passed up. We love a good time here in Atlanta, so expect tons of exciting nightlife options to choose from.

As more developers flock to Atlanta, the housing market is expected to grow tremendously and become even more competitive. That’s great news for any renter thinking about moving from NYC to Atlanta.

While apartments in New York may require you to have a deposit and 2-4 months rent on hand— Atlanta renters are met with amazing specials, waived application fees, move-in concessions, and free parking .

There are so many centrally located buildings to choose from, that it can become a bit confusing and daunting for someone new to Atlanta. Luckily, AptAmigo exists to roll out the red carpet and make relocating from New York City a breeze.

If you’re tired of the harsh and sometimes long winters of NYC, Atlanta provides shorter and milder cold months. You’ll be able to enjoy the many green outdoor spaces long after you could in New York.

With warmer weather typically stretching from early May to mid October, it’s not uncommon to spend a Fall weekend brunching along the Beltline or strolling through Piedmont Park. If you prefer something a little more secluded and want a quick getaway from the city— Silver Comet Trail offers a great option for biking or horseback riding.

Whatever you do don’t call it “Hotlanta.” (Locals aren’t too keen on that name.) Although it is true that it can get pretty humid and hot in the summer months and sometimes fall. In 2019, temperatures hit 99 degrees in September, which was the third hottest day on record in Atlanta for the month.

I think it goes without saying that you need to stay hydrated and wear plenty of sunblock here.

On average, weather is pretty moderate with highs around 89 degrees in the summer, cool fronts in the fall and the occasional dip in the 30s for winter months. Nothing to break out a snow plow for— unless you were here for the “Snowpocalypse” of 2014.

If you’re moving from NYC to Atlanta, commuting is going to be a lot different than what you’re used to. NYC is a city of public transportation, but Atlanta is pretty massive— especially for a metro area— and commuters are coming from the dozens of surrounding counties using their personal vehicles.

Be prepared to get familiar with your interstates “ITP” (Inside the Perimeter) and “OTP”(Outside the Perimeter). These major highways can get jam-packed fast as most Atlantans rely on their cars as their main means of transportation. If you’re intown or “ITP”, commuting may be a bit shorter or just a MARTA ride away, but the buck stops short for our train system if you live anywhere outside of i285.

It’s a better time than ever to move to Atlanta from NYC because our job market is booming. Part of this is due to the 16 Fortune 500 companies with headquarters within the city. Local universities like Georgia Tech and Emory foster so much talent that the tech and start-up culture in Atlanta has quickly caught the eye of many businesses.

Marketing platform Mailchimp and scheduling software Calendy are both headquartered in Atlanta, and many more are planning to move here in the coming years. This means new job openings as well as new resources for local small and medium-sized businesses.

As these large companies move in, places like Atlanta Tech Village have flourished. Hubs for like-minded entrepreneurs, startup incubators, and tech communities are booming.

Atlanta is home to some of the largest TV and film productions in the United States. Numerous actors, film makers, directors, and producers have filmed in studios across the metro Atlanta area. Feature films have been shot at Pinewood Studios, Tyler Perry Studios and Screen Gems to name a few.

These iconic studios are employing many New York and Los Angeles creatives with dreams of working in the film industry. Turner Broadcasting is also headquartered in Atlanta and provides great opportunities to work in animation, sports, and news reporting. Lights, camera, Atlanta!

If you’re looking for a place to live, work, and play, check out our list of the best apartment co-working spaces in Atlanta here.

If you’re moving from NYC to Atlanta, reach out to AptAmigo and get the support of apartment experts who care. Let us know what you’re looking for in an apartment and we will find something that checks all your boxes.

Why do New Yorkers move to Atlanta?

Many New York transplants view living in Atlanta as an upgrade. Warmer weather, less expensive cost of living, and a slower pace of life can be found in Atlanta. Although at the same time the city still has the cosmopolitan offers of NYC. Rooftop cocktails, various events, great food, and endless entertainment options abound in Atlanta, rivaling New York in many ways.

Is moving to Atlanta a good idea?

Atlanta is one of the best places to live in Georgia hands down. A gem of the South, Atlanta is a cultural and creative hub with great food and nightlife. A vibrant, world-class city that still maintains its southern charm.