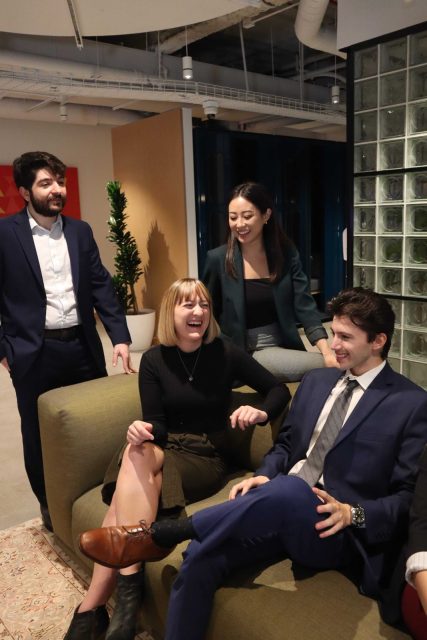 “I never felt like I was in the right place.”

Bobby Brandt is an experienced professional with an MBA and several careers under his belt before AptAmigo, from investment analyst in the public sector, to consultant at a Big 4 Accounting Firm.

Yet, nothing ever felt like the right fit, except for his bartending side gig. But that was a side gig.

“I was taking jobs I either liked, but they weren’t at the right place… Or, I was looking for the next thing to make some money, looking for that resume builder. But that wasn’t my thing, either.”

But that novelty faded every single time…

And each work day became a grind for him.

Bobby reached a breaking point when, at his consulting job, he was struggling to get out of bed. Work was affecting his mental health. He knew he had to leave for something better — even if this consulting job looked great on a resume.

“I found myself furloughed.”

Bobby felt like he took a step in the right direction when he joined a corporate event management software company. He enjoyed the industry and liked working with the firm’s clients.

But it wasn’t to last.

COVID-19 struck the world five months into his tenure at the new place. Bobby held onto his job for a long time despite being adjacent to the hospitality industry, but in September 2020, he found himself the victim of a layoff.

“I was at a crossroads…”

While contemplating his next move, one of Bobby’s friends told him AptAmigo was expanding into new markets and needed agents in Austin, TX.

Funny coincidence: this friend had gone to school with AptAmigo CEO Dan Willenborg. Bobby met Dan years ago through this friend, when AptAmigo was still in its infancy, and learned a bit about the company back then.

Bobby started thinking about how some of his DC friends were in real estate. They had mentioned Bobby might be good at it and enjoy it.

He also remembered how much he loved the atmosphere and social interaction at his bartending side job in DC.

Bobby mulled it over. AptAmigo sounded like everything he wanted, and he could see himself living in Austin… but another career switch? What if this one didn’t work out?

And a job without a steady paycheck? In a brand new city? After getting laid off? During a pandemic?

But Bobby was confident in Dan Willenborg’s vision for AptAmigo, so he interviewed and landed an offer in early April 2021.

The offer was contingent on Bobby getting his Texas real estate license, as Texas is stricter than most other states about the industry. 180 hours of classwork and numerous tests later, he had everything but the licensing exams done by May 10th — just in time to start with the new Austin agents — all while looking for a place to live in Austin.

“I did eight deals in two weeks.”

After a whirlwind of a month, Bobby moved down to Austin the Friday before orientation and training.

Come Monday, May 10th, he arrived at AptAmigo’s WeWork space in downtown Austin and trained for one day before it was time to work. At this point, Bobby already felt, deep down, this was where he was meant to be.

But he still had to pass the national and state exams. He knocked those out on Wednesday and was making calls alongside his teammates by Friday, May 14th.

It was a scary prospect at first. Bobby had just one day of training, but he was supposed to close clients?

But those fears were gone soon after he started.

Two work days later, on May 16th, Bobby closed his first deal. By Friday that week (the end of his first full week), that rose to five.

At one point, Bobby closed three deals in a day, two separate times in his first few months. Such success only increased his confidence in his new role.

But closing deals or making money aren’t his favorite parts — it’s the outpouring of congrats and support when you’re killing it.

“Every time you get a deal, your entire team knows because it goes in our Slack bulletin board, and Dan and Danny (Chief Revenue Officer) personally Slack you. Everyone constantly supports each other whenever a deal is done.”

“A lot of deals didn’t go through in July.”

Riding the highs of his initial success made the first week of July, which was slow for business, feel a lot worse.

Doubts crept back in. What if this was just another fluke? Was moving to Austin for this job a terrible mistake?

But those initial calls back in May built strong camaraderie among the new agents, so he leaned on his coworkers for support. They commiserated, and everyone made themselves available for a quick chat or venting session.

“There was never a moment where I felt like I was navigating challenges alone. There was always an outpouring of support from other sales reps, sales managers, and even Dan, as we started navigating the ups and downs of the role.”

Eventually, leads trickled back in, and Bobby was back on track to closing deals.

“I’m excited to see where my career trajectory goes within the company.”

Bobby no longer feels the need to plan his next career move. He’s optimistic about his future at AptAmigo — he finally found his niche.

Finally, his job hardly feels like “work.” Bobby leaps out of bed every morning, energized to get to work.

“At my previous jobs, it was mundane. Put on your suit, go to the office, sit in meetings all day, all that drudgery. This job has been incredibly rewarding, and also flexible and autonomous. No sitting in meetings all day. Other than client tours, I have a ton of control over my work.”

Bobby’s excited to help AptAmigo bring on new agents and other team members, grow its Austin market, and see the company expand into new markets.

“Clients calling you to thank you for your help and say how excited they are that they landed an apartment they love — it feels really, really good knowing you helped someone through a stressful process in their life.”

It took Bobby many years to find his niche…

But at AptAmigo, he finally landed in a company culture and team where he truly feels at home.

AptAmigo is expanding fast and looking for more agents to help renters find their dream apartments. We don’t cap commissions, meaning your earning potential is unlimited.

No real estate experience necessary, either — new hires regularly place clients in their first week on the job. You can learn more about our mission and why AptAmigo is the best place to start your career in real estate.

AptAmigo is proud to be an equal opportunity workplace and does not discriminate based on race, religious creed, color, national origin, ancestry, genetic information, physical or mental disability, medical condition, marital status, gender, age, sexual orientation, gender identity, veteran status, or any other characteristic protected by applicable law, in connection with any aspect of employment at AptAmigo.

AptAmigo is the best place to start and build a career in real estate.

AptAmigo is rapidly disrupting the apartment locating industry. We’ve been able to bootstrap our way to over 5000% growth in the last three years and become the most-reviewed apartment locating service in major cities across America. Our goal is to be the best at what we do, and we’re looking for highly motivated individuals to join us in building the future of rental real estate. Learn more about us.

Hear What Our Employees Think

“AptAmigo puts a great deal of effort into building a team-oriented culture. Everyone here supports, encourages, and motivates each other to live up to their full potential every day.”
Karrie Fuller, PhD
Blog Manager