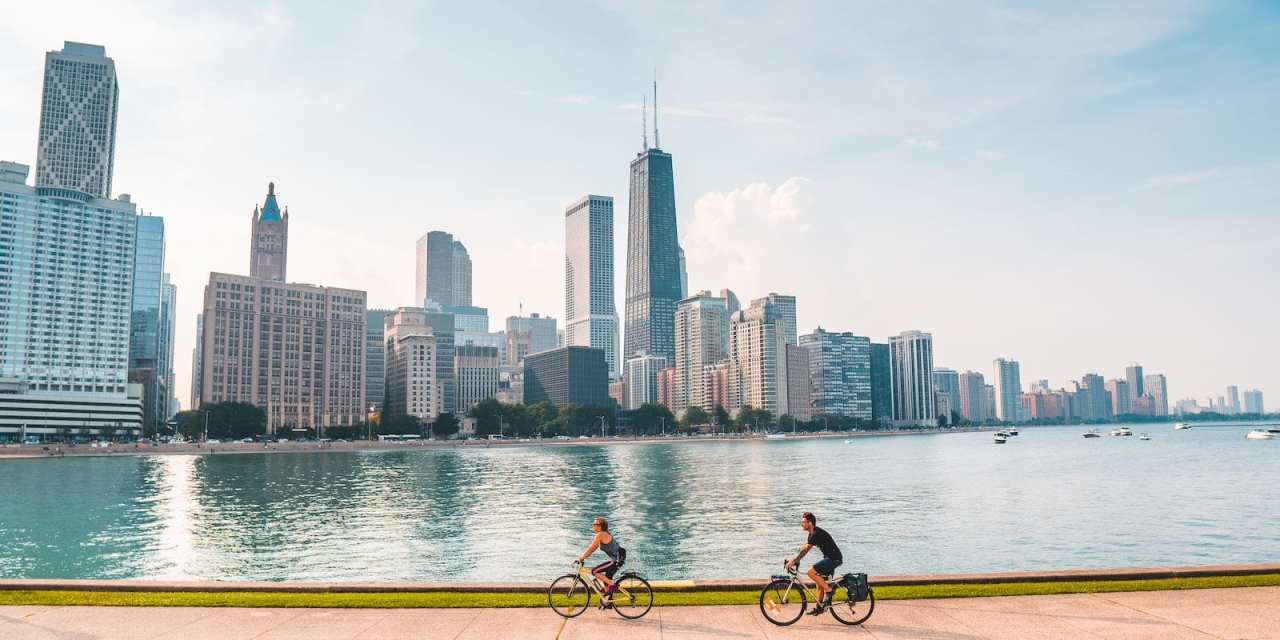 Cost of Living in Chicago

Related: How to Find the Best Apartments in Chicago

People relocate to Chicago for many reasons, from a new job, to a need for a change of scenery, to a sheer love of the 2nd best city in the entire world. Whatever your reason for moving here, you’re in luck. Chicago residents love their home, if not their winters, and overall the place receives high scores for quality of life.

As the third largest city in the US, it provides a brilliant introduction to city life and offers so much to those who come to work, stay, and play. With good public transportation options, a host of cultural activities, the best dining spots in the country, and numerous hidden gems, it won’t take long for you to feel like you found your home here. However, before you take that final leap, you’ll want to learn more about the cost of living in Chicago and read some relocating tips for your upcoming move.

Looking for your dream home in Chicago? AptAmigo will guide you through the process and help you find the perfect place to settle down. A free and no-stress service tailored to your needs makes relocating somewhere new easier than ever.

Cost of Living in Chicago

Looking for somewhere you can simultaneously revel in nature and the city, while dining in incredible waterfront restaurants? Want to know where you can get a big-city vibe, while still enjoying a sense of community? You might answer yes to these questions, but still wonder how much rent will cost in such a big city. Surely, with so many great activities on the agenda, Chicago living can’t be cheap. Luckily, Chicago isn’t as pricey as you might think.

As with most cities right now, rent is on the rise, but it’s still not as pricey as New York, Miami, San Francisco, and many cities in California, such as San Jose and San Diego. In a Chicago cost of living comparison, Chicago ranks only about 20% higher than the average US city. In fact, despite being the 3rd largest city in the country, Chicago doesn’t even make the list of the top ten most expensive cities in the US, giving you a good indication that rent prices might not be as high as you’d imagine, at least for people used to big city prices. For someone coming from a smaller town, the cost of living in Chicago could seem high in comparison.

As far as geography goes, Chicago is a city organized by many neighborhoods, each bringing something different to the table. Some of the most expensive ones lie near the city’s main downtown attractions, or near Lake Michigan. The new luxury apartment buildings constantly popping up make these areas exciting places to live. Some of the most expensive neighborhoods include Old Town, Streeterville, River North, and Greektown.

On the other end of the spectrum, cheaper places include Buena Park, West Ridge, Austin, and South Chicago. Some sit close to Lake Michigan, but outside the city center, making them great spots to live if you prefer a quieter location further from the action, but still only a short train ride away.

Cost of Rent in Chicago

The average rent in Chicago currently hovers around $2,000 (or more according to CNBC), although this can fluctuate up or down depending on the location, quality of the place, and size. You can find cheaper one beds in areas such as Albany Park, while central Chicago can see much higher prices. To save money, keep an eye on what the market looks like from month to month and ask about any up-and-coming areas. Neighborhoods on the rise tend to be cheaper, and they come with new buildings that offer fancy amenities.

If you adore the buzz of city life, it might be worth forking out a bit more to stay in downtown Chicago. Several trendy neighborhoods just along the outskirts of that area are a little more affordable and worth checking out.

Historic and buzzy neighborhoods, such as Lincoln Park, fill Chicago’s northside, where many longtime residents put down roots. The trendy westside encompasses such hotspots as Randolph Street’s restaurant row and many murals and monuments in popular neighborhoods, like West Loop and Fulton Market. The average rent here tends to be above average, starting at $1,400 for a studio apartment.

The South Side is more affordable rent-wise, coming in at an average of $1,515 a month, with studios starting at around $900. Yet, the area still has a lot to offer. You can find Hyde Park’s University of Chicago, with many nearby student hangouts and a range of historic districts.

Cost of Utilities in Chicago

For utilities, such as gas, electricity, water, and garbage pick-up, the average price in Chicago comes in at $159.21 per month, according to Numbeo. While this price tag is lower than in many other American states, it will affect your overall budget and can diverge from the average during extreme temperatures. Chicago experiences hot, humid summers and cold, snowy winters, so you need to factor in that you will likely use your AC and heating units heavily in those respective seasons.

Also, keep in mind that you might need to pay for your own wi-fi, which will add an extra $50-$60 to your monthly costs.

Chicago’s average monthly expenditure for groceries is currently around $360. This cost varies depending on where you shop, how often you shop, and the sort of food you eat. If you go out to eat more often, you might pay less for groceries, but more for your discretionary budget to cover those outings. If, as a savvy cook, you know how to stretch a dollar in the kitchen, you could pay less overall.

With an average rating of 100 for cities in the US, Chicago receives a score of 97.2, placing it slightly below average. However, in a city packed with street food, local eateries, and Michelin-starred establishments, you need to factor in eating out when planning your monthly budget’s discretionary funds. When going out to eat, the average cost of lunch for one person is around $16, so expect to pay more if heading out for a fancier dinner.

According to the Average Salary Survey, the average salary in Chicago is $86,378 per year, but the most typical salary sits much lower at $52,000. If you make an amount closer to the $86,000 average, it works out to $7,198 per month before taxes. Since rent will cost around $2,000, that salary would work out well for your budget because you should bring in at least three times your monthly rent to live comfortably. However, if you earn the more typical $52,000 salary, you might want to look for a roommate to better manage the cost of living, or find a place outside of the city center to avoid the higher downtown rent prices.

How Much Does it Cost to Live in Chicago?

If you land an apartment for $2,000/month, you’re looking at almost $2600 for your monthly budget without the additional costs of leisure activities, shopping, car ownership, student loans, streaming services, and any other monthly payments that you normally make. If you need to cut costs, take advantage of all the free things to do in Chicago (there’s tons), including museums, parks, beaches, and events.

How Does Chicago Compare to Other Cities?

Even though Chicago is the 3rd most populous city in the US, it doesn’t come with the price tag of its bigger siblings, New York and L.A. Instead, the cost of living here, while 23% higher than the national average, resembles that of a few cities much smaller than it. However, it does remain more expensive than most mid-tier cities, such as Pittsburgh, Greenville, Fort Wayne, Knoxville, and St. Louis.

Advice for Moving to Chicago

Should You Rent or Buy?

Many of Chicago’s residents rent, especially early in their careers, for the flexibility and the opportunity to live in some of the city’s most desirable neighborhoods. Some would-be buyers get priced out of buying a house in the hot market these days and choose to rent for longer, but some reasonably priced condos still pop up on the market every now and then. Condos in Chicago can make great starter homes for people ready to invest in home ownership.

However, apartments add new amenities all the time, such as gyms, coworking spaces, basketball courts, game rooms, and more. As a result, apartment complexes enable more and more social interactions among residents and increasingly offer a sense of community, as opposed to an isolated room for rent. These social spaces now attract people in droves, especially as more people work from home.

Moving to your new home in Chicago feels exciting, but it’s essential to arrive as prepared as possible. Check out our ultimate moving checklist for pointers on how to make your move as hassle-free as possible. From packing same-room items together, to keeping refreshments available during the day (moving is thirsty work), you can ease some of the stress of moving.

Whether you visit Chicago all the time, or you plan to move site unseen, there’s never a dull moment here. Why not experience one of many Chicago tours (we love the architecture tour) to get your bearings? Tours take place on land, on water, and even by helicopter, giving you the chance to learn the major landmarks and a bit about the city’s history. You should alo immerse yourself in the city’s culture and explore places like the Field Museum of Natural History and the Art Institute of Chicago.

If you’re ready to move to Chicago, we are here to help. At AptAmigo, we know that finding the right apartment for you and your needs can be a struggle. In fact, we will find your dream home in your dream location for you — without any stress. We’ll connect you with one of our Chicago experts who knows the area inside out, including some amazing apartment buildings that you would never know about otherwise.

Our service is free, friendly, and open to you no matter the day of the week or the time. Get in touch with us to find out more.